2nd race – “BROADWAY MUSIC GAL [who won]…was never in jeopardy while never letting up with whip – whipped to wire.”

3rd race – “DOMER…opened up daylight and then was under the whip for the win.”

5th race – “LADY RHUBARB [who won]…under the whip was all out to last. PARIS SUNSHINE…under extreme right handed pressure gained and just missed. LUCKY SOCIANO…drifted out in the lane while under left handed pressure and rallied wide.”

8th race – “CONGAROO…under the whip for the score.” 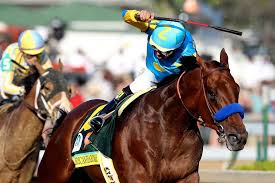 “JOCKEY SANTIAGO MENDEZ IS FINED THREE HUNDRED DOLLARS FOR VIOLATION OF CALIFORNIA HORSE RACING BOARD RULE #1688 (USE OF WHIPS – WHIPPING IN POST PARADE) ON FRIDAY, JUNE 26, 2015. The foregoing ruling was issued after Jockey Santiago Mendez was cited for warming up his mount with his crop prior to the seventh race on Friday, June 26, 2015.”

“…warming up his mount with his crop.”

“Three equine deaths were reported this week due to racing injuries.” Identities, however, withheld. This is horseracing.

A few odds and ends:

In a weku article (4/29/15) on Lasix, longtime (45 years) equine vet Mark Chaney offers his reason for supporting the raceday medication: “If you and I were in one of those stalls 22 hours a day, we’d have COPD so bad and emphysema. You know, you probably couldn’t even breathe.” How’s that for a (probably) unwitting condemnation of his entire industry?

In a Wall Street Journal article (5/25/15) on Victor Espinoza’s merciless whipping of American Pharoah in the Kentucky Derby, former Vice Chair of the CHRB Bo Derek is referred to as an “animal-rights activist.” Sorry, racing director and animal rights activist are wholly incompatible terms.

From the Santa Anita “Stewards Minutes” for May 21: “Jockey JOSEPH TALAMO was in the office this morning to review the stretch run of the fourth race from May 17, during which he hit his mount over the left ear with his whip several times. After viewing the race, the rider said he did not realize that it was improper to hit a horse on the ear as he had seen old videos of Hall of Famer CHRIS MCCARRON doing the same thing.” The next day, a ruling was issued: $300 fine and a “warning” – because, you know, “a warning [is] sufficient for a first time offense.”

While reviewing the Equibase charts for yesterday’s races, I came across this note on the 9th at Finger Lakes: Stop Sign, the winner, “whppd to wire” (actually, both other top finishers endured the same). So I found the replay:

Steve Haskin, whom I’ve written on before, is a well-known Racing writer and a lifelong fan. But he also possesses, at least from what I can gather through his words, a thoughtfulness that sets him apart from many of his callous or indifferent colleagues. In other words, he seems to genuinely care about the horses. So it was with great interest that I read his recent column (Blood-Horse, 5/10/15) on Victor Espinoza’s 32-lash run atop American Pharoah in last week’s Derby. In it he imagines a back-and-forth between himself and, I suppose, someone like me:

Racing person: “Horse racing isn’t cruel. The horses are well-taken care of, they are bred to run, and they love to run.”

Non-racing person: “If they love to run why do they have to be whipped to do it?”

Racing person: “Uh, well, let’s just say most love to run and some are lazy and have to be encouraged to run.”

Non-racing person: “So, doesn’t encouraging any living creature to do something it doesn’t want to do by whipping it constitute cruelty?”

Racing person: “Not in racing. Whips today have been re-designed and are much kinder on a horse.”

Non-racing person: “So, are you saying American Pharoah was lazy and needed to be encouraged to win the Derby, and that’s why the best 3-year-old in America was hit over 30 times with the whip?”

Racing person: “No, but he had never been in this tough a fight and needed to be reminded that this was no cakewalk, like the Rebel and Arkansas Derby. Also, Victor Espinoza wasn’t hitting him on the bare shoulder or rump, but was hitting him in the area around the saddle and girth, where there is more protection.”

Non-racing person: “So, let me get this straight, Espinoza was making sure he wasn’t hurting the horse, but only days later was fined for breaking the skin on the filly Stellar Wind due to excessive use of the whip.”

You can see where this conversation is, or isn’t, going. For every explanation we attempt to give, there is always going to be another question. …What makes it even more difficult is that in many cases, such as this, we’re also trying to convince ourselves. After all, why would we devote our lives and pour our emotions into something we believe deep down is cruel or at least has elements of cruelty in it? When we attempt to defend certain aspects of racing, to whom are we really defending them?

In the sport’s recent glory days of the 1960s and ‘70s, drugs, fixed races, neglect, and horse slaughter were kept safely behind the curtain. Naivete superseded cynicism, and we saw only what was shown to us and what we wanted to see. The whipping of horses was one thing that was played out on stage, but we paid no attention to the amount of times a horse was whipped. We didn’t even know to what extent a horse felt those whips. …We marveled at [the horses’] amazing feats, oblivious to anything else. When you are exposed to someone or something with such great beauty, there is no reason to start peeling back the layers of makeup. No one wants to see what lies beneath.

And now almost a half-century later, some of us, who remember the innocence and ignorance of those days, are asked to explain and defend the sport with which we fell in love a lifetime ago. But how can you defend something you can’t defend, as much as you try to instill its righteousness and nobility into your own heart and soul? It has to be deeply embedded in there before you can convey it to others.

The most difficult part, however, is trying to explain racing’s pitfalls in the form of drugs and neglect and abuse of the whip to those who love the horses and are sickened and appalled when they are abused in any way. Those are the people who come to me looking for answers. The truth is, I have no answers, because, I, too, am sickened and appalled.

Talk about a conflicted soul, exactly the type that frustrates the most. The aforementioned callous and indifferent are, for all intents and purposes, beyond reach – immune to our calls for mercy. But here we have someone publicly grappling with his past “innocence and ignorance” yet heretofore unable/unwilling to upset a lifetime of conditioning (“horseracing is the most beautiful, exciting sport in the world”) and self-delusion (“righteousness and nobility”), unable/unwilling to follow his reflective course to its compassionate conclusion.

(In the Blood-Horse article, Haskin references Miguel Mena’s “over-zealous use of the whip” on International Star in this year’s Louisiana Derby. Here it is – pay particular attention to the replays at 2:33 and 3:08.)