Meet Todd Pletcher, Thoroughbred trainer. 5-time Eclipse winner, 10-time top guy at Saratoga, 7-time highest American earner (over $250 million lifetime), Mr. Pletcher also owns a Kentucky Derby and a pair of Belmont Stakes trophies. Raised around tracks and tutored by the legendary D. Wayne Lukas, the smart and business-savvy Pletcher seems well on his way to the Hall of Fame. Yet amid all the accolades, another part of his story needs telling. 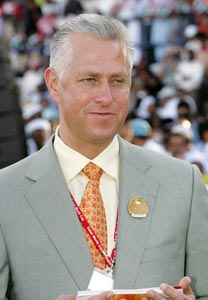 In August 2004, the Pletcher-trained Tales of Glory tested positive for Class 2 mepivacaine after a win in Saratoga. He was suspended 45 days.

After an October 2008 BC race, his Wait a While was found to have more than 300 times the allowable limit of Class 3 procaine in her system. In defense, Mr. Pletcher, through his vet, said the “overage” came from a weeks-old granuloma (which formed after treating a fever) that ruptured and released the trapped drug during the race. The California Horse Racing Board (CHRB) practically called this ridiculous. More likely, it said, Wait a While was given another shot(s) of procaine closer to raceday, perhaps within 48 hours. But since there was no proof that Pletcher ordered or knew of it (imagine that), he was handed a 10-day suspension. Wait a While, then 5, never ran again. Final fate unknown.

In February 2010, two of Pletcher’s horses (Obligingly, Quality Road) tested positive for omeprazole sulfide at Gulfstream Park. He was “reprimanded.” On February 25th, 2012, Pletcher’s 4-year-old Coronado Heights, who had been diagnosed with early degenerative joint disease, broke down at Aqueduct and was subsequently killed. The New York Times ran this graphic on the multiple injections administered to Coronado Heights the week before his death.

In its report on the 2008 incident, the CHRB said: “It is impossible to overstate the damage that drug violations in Breeders’ Cup races can do to the integrity of the sport of thoroughbred horse racing. This is no longer the 1930’s when the Sport of Kings seemed invincible.” But on the other hand, Mr. Pletcher has had “a stellar 15 year career.” Verdict: 10 days. Anyone who still asserts that horse welfare – genuine concern for the equines beyond their ability to race – is an industry priority is either dishonest or delusional.