From our executive director, Nicole Arciello:

After a few years of advocating for racehorses, I realized that I wasn’t the only one who was feeling sad and helpless on the big race days – the hype, the ads, the posts from those unaware of the cruelty attending Derby parties. I saw posts from other advocates who felt the same way.

I was determined to take that day (and others: Preakness, Belmont, Breeders’ Cup) and make it a day of positive action for the horses instead. We will no longer sit idle and allow the smoke and mirrors to continue unchallenged.

Last year on Derby Day, we staged a “National Day of Protest to End Horseracing.” The feedback we received not only from advocates who were able to attend protests, but from those following the live-streams and media coverage, was extremely positive. The day was changed from a day of sorrow to a day of action. This year, we were planning the same until Covid-19 arrived and changed everything. The race was rescheduled, but we advocates would not let the still-suffering (and, yes, dying, because some racing continues) horses be forgotten. But, I wondered, how best to go about that? Enter “The Virtual Rally to #EndHorseracingNOW.”

I asked everyone with the means – data, wifi, social-media accounts – to take part in an all-day event. Not for just an hour or two, but 24 hours of continuous posting to Facebook and Instagram, and an all-day Tweet Storm, too! It was a lot to ask.

So as I awoke at 5 am Saturday, I was delighted to see that people all over the world were already tweeting and posting and sharing our event! The outpouring of support was amazing! I’d seen other virtual events with 20 people “interested” or “going,” but we had over 500!

As the day unfolded, there were posts of rescued horses, activists at previous protests, dogs wearing our t-shirts, stories of people turning their backs on the industry and people sharing our information. Our hashtags – #EndHorseracingNOW and #HorseracingKillsHorses – trended on Twitter for the first time ever! While I’m always optimistic that the day for liberating these beautiful creatures will come, yesterday gave me even more hope. I am more certain than ever that their day is near!

Thank you to all who participated, and a heartfelt gratitude to those who donate, who read this blog, who attend events, who sign petitions and who post on social media!

Thank you for being their voice!

Using names from our list, poet Melissa Balmain composed the following poem commemorating the over 1,100 horses who were (confirmed) sacrificed for $2 bets at American tracks last year. Thank you, Melissa.

This Saturday, Horseracing Wrongs will be partnering with The Coalition for the Protection of Racehorses in Australia and Animal Aid in the United Kingdom to protest horseracing worldwide! This event will take place in YOUR HOME, IN YOUR BACKYARD on Facebook, Instagram, and Twitter!

On this day, the day that would have been the Kentucky Derby, a day of smoke & mirrors, a day in which the racing ruse is at its most obscene – mint juleps and loud hats, “pampered athletes” and “The Sport of Kings” – we will remind the public that Horseracing Is Animal Cruelty, that Horseracing Kills Horses.

As we stay safe and social distance, we will memorialize the horses killed thus far in 2020 and the multiple thousands killed – on track, in stall, at the slaughterhouse – every year. Tweet the truth about this horrible industry and be a voice for those who cannot speak.

How to participate in the rally:

2. Have you attended a protest? Post a photo of yourself at one or a selfie with a homemade sign on Facebook and Instagram telling people why horseracing is cruel. Tag Horseracing Wrongs and use the hashtags #EndHorseracingNOW and #HorseracingKillsHorses.

3. Post an educational graphic on your social-media accounts (see Event Page) asking friends and family not to attend, bet on, or watch horseracing. Tag Horseracing Wrongs and use the hashtags #EndHorseracingNOW and #HorseracingKillsHorses.

4. Have you adopted or rescued a racehorse? Post a photo with his or her story or educational information about horseracing cruelty. Tag Horseracing Wrongs and use the hashtags #EndHorseracingNOW and #HorseracingKillsHorses.

5. Invite everyone you know to this event and let us know that you will be participating as a voice for the horses! Share!

For the second time in less than two months, The Washington Post’s editorial board has decried the U.S. horseracing industry. While the first, back in January, left the door ever so slightly ajar – “Does a sport that gambles with the lives of horses really belong in our world?” – this one, published yesterday, leaves no doubt as to the feelings of this esteemed board: “Horse racing has outlived its time.” My highlights follow. (Note: I spent quite a bit of time with one of their writers Wednesday. I’d like to think the influence of our work, our message, is apparent.)

“IN THE aftermath of federal indictments that charged more than two dozen people in or associated with horse racing in ‘a widespread, corrupt’ doping scheme, the industry rushed to put on a good face. The arrests, said the head of the Association of Racing Commissioners International, show that the system works, and that will have ‘a cleansing effect’ on racing. ‘Let’s face it. It’s like any sport,’ said one leading horse trainer. ‘We’re no different.’

“Let’s be charitable and chalk up such comments to self-delusion, because anyone who thinks horse racing is like any other major sport is lying, ignorant or kidding themselves. No other accepted sport exploits defenseless animals as gambling chips. No other accepted sport tolerates the cruelties that routinely result in the injury and death of these magnificent animals. The rot in horse racing goes deep. It is a sport that has outlived its time.

“That one of those indicted, trainer Jorge Navarro, openly embraced his nickname as the ‘Juice Man,’ speaks volumes about the indifferent attitude of racetrack operators and regulators who allowed the abuses to flourish. That some of the conversations caught on the federal wiretaps are eerily similar to the callous way horses are discussed and discounted on an undercover video taped by PETA in 2014 make clear that for all the talk about the love of horses, they are just commodities that are used and abused until they are sent off to the slaughterhouse.

“Increased attention to the deaths of racehorses, on average nearly 10 horses a week [our data, of course, says it’s five times as many], has shined a spotlight on horse racing’s dark side that is changing public attitudes. Activities involving animals that used to be tolerated — even revered — like circus elephants or killer whale shows ended as people learned of their terrible toll. Horse racing awaits a similar reckoning.”

My heartfelt gratitude, Washington Post. This is bold, courageous, and most important, right. Thank you. Thank you.

This morning, Horseracing Wrongs was cited and quoted in a Washington Post editorial – but not just any editorial, this comes right from the Board. The title alone is cause for celebration: “Does a sport that gambles with the lives of horses really belong in our world?” Our mentions:

“Horseracing Wrongs [link is provided], a nonprofit committed to ending U.S. horse racing, has counted 26 horses as having died so far this year at U.S. tracks, including four thoroughbreds who were euthanized over a span of six racing days at the Fair Grounds Race Course in New Orleans.

“‘The killing is built into the system’ is the blunt assessment of Patrick Battuello, founder and president of Horseracing Wrongs, who has spent the past five years tracking public data on racehorse deaths at the 100 racetracks in 35 states. He has confirmed 1,000 deaths annually but says the actual number is much higher.” (My own Post editorial from October was linked at the bottom of this one.)

Asking “whether the proposed reforms go far enough,” the Board replies: “We have our doubts and think animal rights activists make a powerful case that the fundamental problem is with horse racing itself.” It closes thus: “It is long past time to stop viewing horse racing through the prism of its past glories and answer the question of whether a sport that gambles with the lives of horses — animals we profess to love — has a place in the modern world.” Thank you, Washington Post.

Our activists were out in force at Gulfstream Park yesterday, there to not only protest the Pegasus, but the cruelty that happens at Gulfstream – and, of course, at tracks across the nation – every single day. Holly Wilson, our Florida coordinator, conducted several interviews, most prominently this one with Fox Miami. 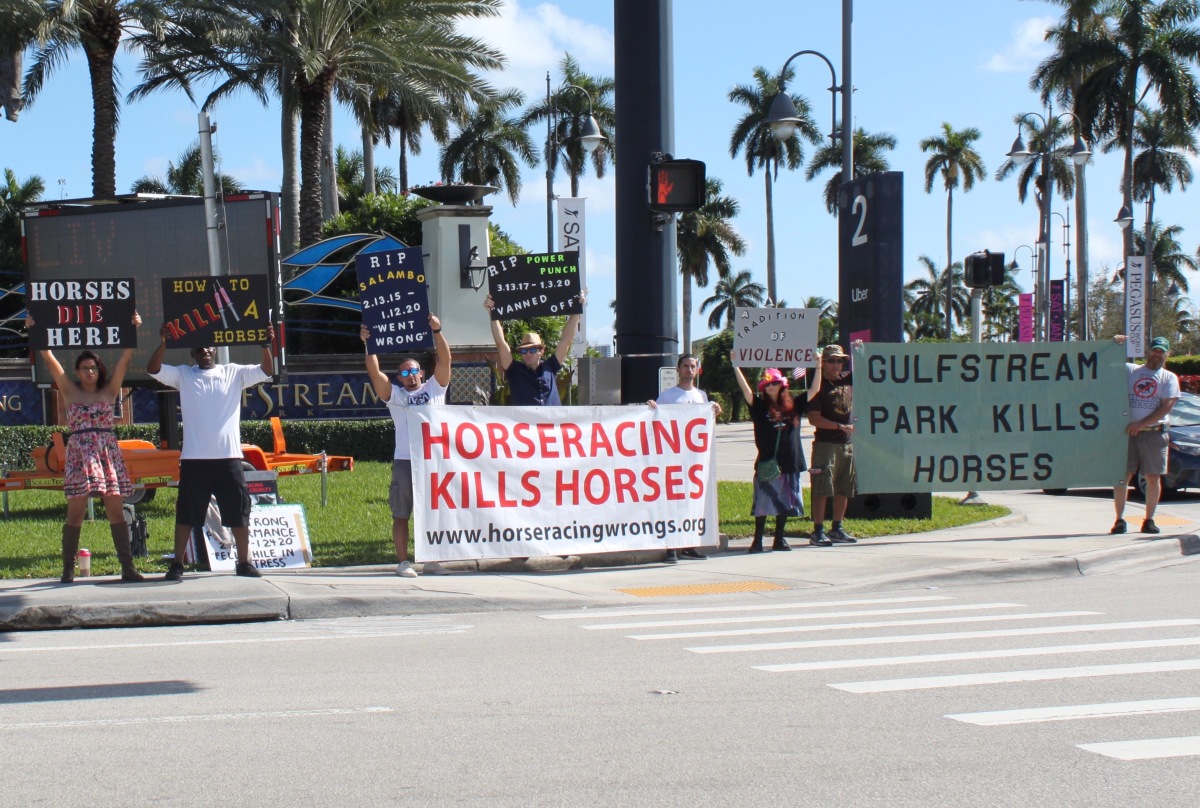 And finally, we have partnered with the non-profit Lady Freethinker for a brand-new billboard in Los Angeles; it will run through mid-March: 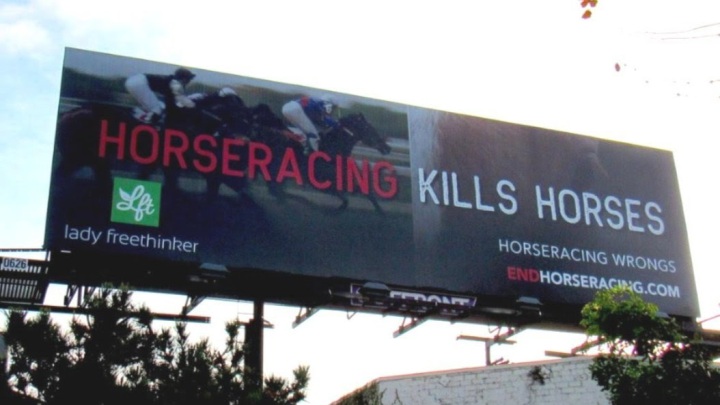 The momentum is all ours.