It is, of course, not hard to find instances of the horse people embarrassing themselves. Take Monmouth Park for example. Last year, the New Jersey track made headlines for being the first in the nation to “ban” the use of whips. (I put ban in quotes because the jockeys still carried them, but ostensibly only for “safety” reasons.) Now, that ban has been rescinded so that, the Racing Commission explains, Monmouth will be aligned with upcoming national rules – six strikes per race, no more than two in succession before giving horse “a chance to respond” – governed by the “Horseracing Integrity and Safety Authority.” So where’s the embarrassment? Well, here’s how Monmouth announced the change (no, this is not an Onion spoof): 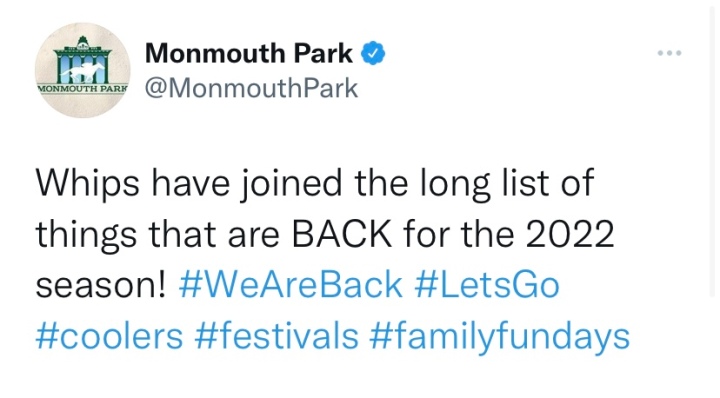 Yes, “Whips are BACK for the 2022 season!” – joining “coolers,” “festivals,” and “family fun days”! Wow. Could these people really be that tone-deaf, that oblivious, that disconnected from current mores? Not only that, they opted for the actual word – whips – rather than the usual and utterly delusory “crops.” Again, wow.

While this should not be necessary, here is the definitive refutation of a century of lies on whips. Dr. Rick Arthur, California’s pro-racing equine medical director (he retired last year) at an international conference in 2019: “There are those who argue that whipping doesn’t hurt horses, but that’s nonsense, and we all know that. Whips are noxious stimuli; they hurt, that’s why they’re used. Run fast or I’ll hit you again.”

And that, folks, is what the Monmouth people can’t wait to get back this summer.