We activists talk often about horses falling through the ranks – their value dropping with their “production” as they make their way from elite tracks to seedy racinos. More often than not, this ends badly – for most, slaughter, for others, simply being run into the ground, with each successive “connection” trying to suck one last dime from the increasingly spent horse. The recently deceased 9-year-old Ike Walker (below) is a prime example of the latter.

Ike was made by Buck Pond Farm in January 2012. Like the chattel he was, Ike was peddled for $125,000 at a Keeneland yearling sale. First raced at two (of course) in July 2014, Ike would spend the first five years or so of his “career” running at what are considered some of the best tracks in America – Arlington, Keeneland, Churchill, Oaklawn, Del Mar, Santa Anita. Those early years saw several stakes races, including a Grade 1, and even though by 2019 he was being raced exclusively at the “claiming” level (“For Sale” every time), his tag at Churchill in June of that year was still a healthy $32,000. But by January 2020, Ike could be, and in fact was, had for just $7,500.

On February 5, 2020, prior to a race at Fair Grounds, Ike was sold again: $5,000. He had officially completed his descent to cheap claimer. Next came the dreaded trek, which is often by sea, to Puerto Rico and the hellhole that is Camerero Race Track. From June 2020 to the beginning of this month, Ike was raced 13 times there. In the final six, the last being August 6, Ike finished a combined 176 lengths back. Five days after that final race (52+ back), Ike was dead from what a former owner (more on them coming) termed “swollen hocks, arthritis and a variety of other medical issues.”

In addition to the aforementioned top-tier tracks, Ike was trained by some of racing’s royalty: Doug O’Neill, Jerry Hollendorfer, Peter Miller, Jeff Mullins, Steve Asmussen, et al. With many trainers, of course, comes many owners: Our research indicates Ike changed hands – was bought and sold – at least 17 times. (Imagine the stress and anxiety poor Ike had to endure – ulcers virtually assured.) Now, the racing world would have you believe that only the final “connections” should be held accountable for Ike’s cruel end. In other words, don’t lay blame on those multiple multi-millionaire trainers and their equally, if not more, rich owner counterparts. Much easier to cast aspersions on the bottom feeders who frequent Camarero. Sorry, not that easy.

Clearly, the several people who handled Ike at Camarero over the past 14 months are scum, with special venom reserved for the pitiless pair who had Ike for his final four races (124+ back) and sent him out on August 6 with that beaten body: trainer Humberto Lopez, owner Establo Barrio Amparo. But all those who exploited him, who shared in the nearly half-million dollars Ike “won,” are complicit. Each of them, any of them, could have retired Ike, or at the very least, kept tabs and intervened at some point. All it would have taken was a simple claim (Ike was going for a pittance on the island). But, not a one stepped up. Which brings us back to that former owner.

Follows are tweets from Surfside Stables, all from August 11, in chronological order: 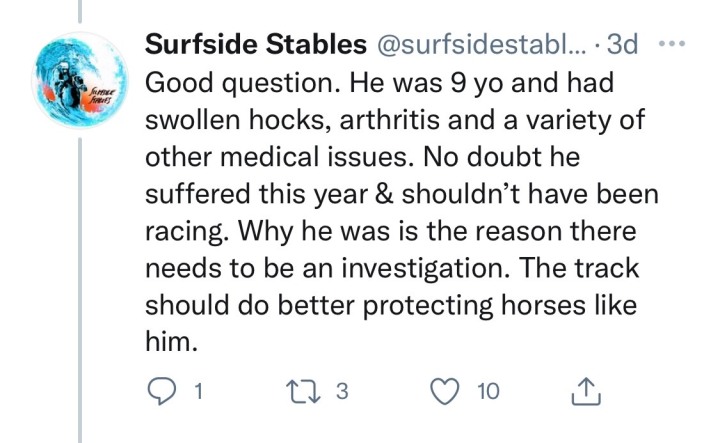 First, we’re skeptical of their “desperate” attempt to “save” Ike: All this tweeting occurred the very day he died; in fact, he had already been euthanized by the time the solicitation for “advice/suggestions” came. “A day too late” – how convenient. But more to the point, if they had truly been “watching Ike for so long,” where was the save attempt over the year-plus Ike was at Camarero? And “didn’t know how to help”? Liars. If they’re still licensed owners, they could have claimed him (remember, Ike was raced 13 times at Camarero); if not, surely they could have enlisted help from racing friends. But again, it’s not just Surfside; all previous “connections” – including that who’s who roster of trainers – have Ike’s blood on their hands. All of them.