The Equibase line for Hit It Once More in the 10th at Aqueduct yesterday: “HIT IT ONCE MORE…got put to coaxing at the three-eighths…was under light handling when bobbling heavily just outside the sixteenth pole, hobbled injured through to the finish the rider paused, then continued to gallop out a sixteenth past the wire before losing the rider then jogged off to the midway point on the clubhouse turn in distress before being apprehended by the outrider and was subsequently vanned off.”

Lots to unpack here, but first things first: Hit It Once More (below) is dead, euthanized, says the Gaming Commission, for a double fracture. Now, back to the chart. In quick succession, this horse was whipped (“put to coaxing”), was showing signs of injury (“bobbling heavily”), was definitely injured (“hobbled injured”), and was forced to continue running while injured – after, that is, the jockey apparently considered his options (“rider paused, then continued to gallop out a sixteenth past the wire”). “In distress,” “vanned off,” dead. What’s more, Hit It was coming off a last-of-12 finish just eight days prior – this for a 7-year-old (old for horseracing) who hadn’t “won” a race in over two years. The responsible abusers: jockey Luis Rodriguez Castro, trainer Amira Chichakly, owner Yellow Moon Stable. 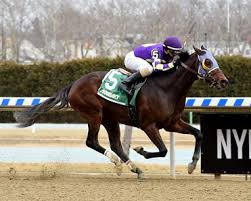