By my count, no fewer than 16 racehorses were “vanned off” American tracks yesterday. That is, 16 horses required an ambulance to get off the course – in one day. While it is highly probable that several are dead, at present I can confirm two:

In just her 2nd time under the whip, 2-year-old Payntermaniac was killed in the “Debutante Stakes” at Churchill Downs. Her trainer, John Ennis, spewed this on Twitter: “Unfortunately with a heavy heart today we lost payntermaniac, a very fast filly who never got to show her abilities!” Coming, as it is, from one of the people responsible for the death, the exclamation point is nothing less than Mr. Ennis twisting the knife in Payntermaniac’s shattered knee. How do you sleep at night? And yet, on Twitter there are folks saying “condolences to the connections.” Vile.

Imperial Legacy, three, also being raced for just the 2nd time, went down in the 5th at Los Alamitos. The Equibase writer said, “took a bad step, was pulled up in distress.”

How can anyone who considers himself or herself a good, moral person continue to defend this? Wake up, America. 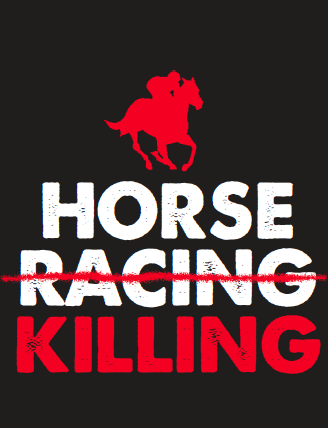