As mentioned previously, the best indictments of this industry often come from within. Take slaughter, for instance. While the racing people typically (and understandably) avoid this issue like the plague, occasionally some honesty surfaces.

In a recent HorseRaceInsider article, long-time industry writer and handicapper Mark Berner takes Racing to task for its “inability or unwillingness to deal openly with the issue of horse slaughter.” While I’m quite certain that Berner’s real worry (as evidenced by the article’s title) is that slaughter is killing the “sport” he so dearly loves, he does offer some seemingly genuine words of outrage:

“If a breeder elects to bring a horse into the world, it is their responsibility to make sure that horse is cared for until its natural death. It is not simply the cost of doing business; it is about doing what’s humane and morally correct.”

But it’s the stark admissions that caught my eye. Two statements in particular:

Then: “Since the Thoroughbred industry has not significantly corrected this situation, the same percentages – 20% of all horses sent to slaughter from the US are Thoroughbreds – are safely assumed to be correct present day.”

And to think that all this time I’ve been citing the “only” 19% found in this seminal study. So let’s break this down. According to the Equine Welfare Alliance, 114,000 American horses were sent to slaughter in 2016. 20% of 114,000 is almost 23,000. For that same year, the Jockey Club estimates the “foal crop” – newly registered Thoroughbreds – at 21,000. That would be an over 1:1 ratio of those exiting-via-slaughter to those coming in. Obviously, not all retired (or never-made-the-cut) Thoroughbreds end up bled-out and butchered. But even when accounting for some slight industry contraction each year, the numbers make it abundantly clear that at the very least most – Berner’s “overwhelming number” – eventually (because some will have an intervening round of exploitation – the so-called second career) do. 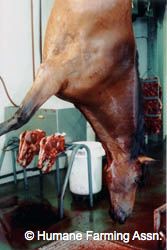