Horses have been a major part of Joy Aten’s life for 25 years. Shortly after the creation of CANTER in 1997, she became a volunteer and eventually an executive board member. Her responsibilities as chair of the rescue’s Track Committee at Great Lakes Downs (Michigan) took her weekly to the barn area (the “backside”). It was in these shedrows that she first became aware of racing’s dark underbelly.

Joy devoted nine years to CANTER Michigan, working with owners and trainers in an effort to get them to sell or donate their “spent” horses rather than sending them off to slaughter. Once acquired, she worked hard on rehabilitation and retraining. Today, through individual and group efforts, she remains active in the rescue and placement of retired racehorses – indeed, of all breeds in need. Joy is also a co-founder of Saving Baby Equine Charity, a member of the Michigan Horse Welfare Coalition, and an adviser to the documentary, “Saving America’s Horses – A Nation Betrayed.”

In addition to 4 children and 10 grandchildren, Joy proudly counts four horses – two of which were racing Thoroughbreds – as family members. She says: “Greenwish and Saucon Creek came off the track injured, worn-out, and used-up. Sharing their lives is a constant reminder that there are thousands of horses just like them. Daily across this country, Thoroughbred racehorses are sacrificed for the financial gain of owners and trainers. And thousands more end up on slaughterhouse floors.”

Joy lives by the credo: “I am only one, but still I am one. I cannot do everything, but still I can do something. I will not refuse to do the something I can do.” 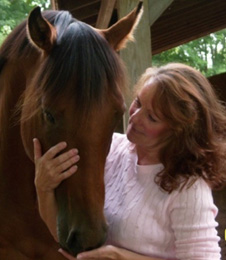 How many times have we been told that racehorses are loved by their owners? I used to believe it. Not anymore. So when the breeder of a racehorse in need suggested I contact the former owners for help (“They loved that horse!”), I didn’t get my hopes up. And they didn’t surprise me.

In December of 2009, our small group of horse advocates was made aware of several racehorses in poor condition, all with the same owner and all up for sale on Craigslist. What could have been a relatively quick and easy rescue – the horses were already for sale – was instead extremely difficult with the owner demanding outrageous prices for his skinny, used-up racehorses. The horses were listed for 3K up to 6K and in a phone call to him, it was quickly determined he was not budging on the prices. We sent one of our group members, acting as a potential buyer, to the farm where the owner kept his horses. The visit revealed the horses to be in worse shape than expected, so we notified the local animal control authorities. But as is typical with animal neglect cases in many Michigan counties, no charges were filed. Within days, the owner moved his neglected horses to another location – “out of sight.”

I remembered one of the horses from when he raced, during the years I was with CANTER-MI. His name was Heza Mountain Man, and I thought of him as Black Beauty come to life. He was stunning. Although “just a Michigan-bred,” the dark bay 2001 gelding was quite the celebrity at the Midwest tracks where he ran. He was a multiple stakes winner and had earned over 156K from 55 starts. In a 2003 Daily Racing Form article about an upcoming stakes race at Great Lakes Downs, Heza Mountain Man was “the one to beat.” And to this day, his breeder – Davidson’s Tracks-N-Time – has photos of him on their website as one of their winners. I decided to contact the gelding’s breeder to request financial assistance for his acquisition. She responded: “We here at the farm are just hanging on and have no extra money to help with his purchase or keep.” She then suggested I contact his former owners, John and Jan Buth, since Mrs. Buth “really loved that horse.”

Heza Mountain Man raced for the Buths for four years, starting 32 times and earning over 135K for them. But by the time he was a 6-year-old, his earnings steadily decreasing, they were putting him in 10K claiming races without any takers. So on July 30, 2007, they dropped him into a 4K, and he was promptly claimed. Knowing this, I decided it was still worth a call to the Buths …to ask them to help a horse who brought them into the winner’s circle…a horse Jan Buth “loved.” My conversation with John Buth lasted only minutes as he had no desire to help Heza Mountain Man. In fact, he was quite annoyed that I was asking for his assistance – he curtly replied to my request with “It’s not my problem” and “Take him to your house, I don’t have any room for him.”

Since the horses were still for sale on Craigslist, two of us acted as buyers and made an appointment to see them at the farm they had been moved to. They were now in the physical possession of a horse dealer who regularly buys and sells horses at the notorious kill buyer-attended Sugarcreek Livestock Auction. And although the owner had dropped the inflated prices, they were still too high and out of reach for us…yet in the same breath, he stated if the horses didn’t sell they were going to auction. So on a cold February day, Kim Patton and I met the dealer at his farm to see the horses.

Heza Mountain Man was 150-200 pounds underweight, had rain rot the entire length of his back, and had wounds in various stages of healing on his legs. He and his herd mates were gathered around a poor-quality round bale. There was a lean-to with just one side and a roof in their paddock, so although the environment was sub-standard, by Michigan law it was adequate. We made offers for all five of the horses but were turned down. Imagine this: Heza Mountain Man was 9-years-old at that time, was malnourished and in poor body condition, yet the owner’s bottom line for him was $4900. It was heartbreaking…to us he was priceless, yet realistically, he was worth only a few hundred dollars. We hadn’t raised enough money to buy just Heza Mountain Man at that price, so we were forced to walk away and wait.

When spring came, the horses were moved again (in attempts to get cheaper board, the owner moved the horses four times over the course of a year). We stayed in “careful contact” with the owner, wanting desperately to acquire his neglected horses before he decided one day to send them all to auction, but not wanting to appear too interested and thereby discourage him from dropping the prices to reasonable and affordable amounts. Then in April, we were able to acquire four of the horses at $550 each. But not Heza Mountain Man. At the age of nine and having been away from the track for over a year, he was put back into training.

In July, 2010, after not having raced for 19 months, Heza Mountain Man ran at River Downs in a 4K claiming race where he finished last of seven. On August 31, they ran him again…this time he came in over 20 lengths behind and was last in an 11-horse field. Equibase merely reported “Heza Mountain Man was outrun.” But it neglected to state the former stakes winner collapsed after the finish line, and it took him multiple attempts to get to and stay on his feet. An eyewitness worded it this way: “That old classy horse flopped around in the dirt like a fish out of water.”

It would be about a year from when I last saw Heza Mountain Man at the dealer’s to when I was able to see him again. During that time, he had endured multiple moves, meager living conditions with inferior provisions, lack of adequate food, and having to come out of retirement to train and race again. Neither his breeder nor his owners from his glory days wanted to help him…their fallen stakes winner was “not [their] problem.” But after nearly 18 months of being unable to sell the now 10-year-old former racehorse, the owner finally countered with a price we could pay. On February 25, 2011, we handed Heza Mountain Man’s last owner of record $1,000, and he handed us the lead rope.

In his first month with me, he steadily gained weight and started growing a healthier coat. His former self began to emerge. On March 31st, he received a full lameness evaluation by equine orthopedic surgeon Dr. John Stick at Michigan State University. We were thrilled to learn that although he would never be completely sound – no jumping, just flat work – Heza Mountain Man had only a suspensory injury that was in the process of healing. He had a future.

Heza Mountain Man went to his forever home later that spring. He lives three miles down the road from me, and I drive by often just to see him. He’s easy to spot out in his pasture – it’s like seeing Black Beauty again. But what I’m really looking at is a horse that’s finally loved.