Abuse in racing comes in various forms, not the least of which is running a horse into the ground. Consider a gelding named Coaltown Legend, nine years old and 63 races into a career that began before Barack Obama was elected president – the first time. In his last three starts – all claiming, all at Penn National, and all for the same connections – Coaltown Legend finished last of 7, 27 1/4 lengths back on May 28th; last of 7, 13 3/4 lengths back on June 6th; and last of 7, 13 1/2 lengths back this past Wednesday. To recap, that’s three dead lasts for a 9-year-old racehorse in the past four weeks.

To horseracing the industry, the horses are but expendable assets – movable, replaceable cogs in a gambling machine. Simple chattel. As such, if Coaltown Legend’s current masters – trainer Bryan George and owner Marcus Rodriguez – choose to run him till he breaks, they can. And there is nothing to be done about it. 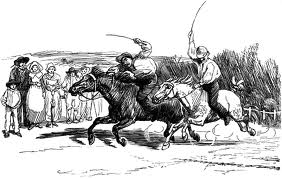