With Saratoga 2013 at an end, the summary is (mostly) bad with some good. First, the obvious: Eight beautiful, sentient creatures were sacrificed so that men could gamble and chase pots of gold…

But on a more positive note, the Daily Racing Form reports that both measures of handle are off from a year ago – all-sources .2%, ontrack 1.9%. Better still, “despite running a record number of races and getting mostly stellar weather for seven weeks,” attendance fell 3.75%. 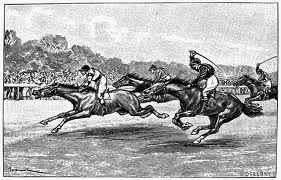 Horseracing finds itself in precarious times. While the likes of Saratoga, Churchill Downs, and Santa Anita are surely with us for a while, the more pedestrian venues, with neither storied pasts nor media minions to recommend them, are unquestionably vulnerable. Indeed, if not for the corporate welfare euphemistically referred to as state/track “cooperation” (racinos), much of harness racing, and likely a good number of claiming tracks too, would be dead or dying by now. If the Saratoga numbers are not simply a one-year aberration, but rather the beginning of a trend, take-notice concern will quickly turn to handwringing.