With the Lasix ban for juveniles ending with this past weekend’s Breeders’ Cup and a trend toward keeping the drug raceday legal in the U.S., I thought it appropriate to revisit these words written by equine veterinarian Sid Gustafson in The New York Times a couple years back (10/28/11). At the time, Gustafson believed that Lasix was on its way out.

“The only ones who benefit from racehorses being medicated on raceday are the attending veterinarians and, subsequently, the veterinary surgeons. …the science continues to demonstrate that chronic use of raceday drugs degrades the quality and safety of racing while impoverishing the welfare of racehorses. Raceday medications increase the breakdown rate.”

“Lasix begets a plethora of additional drug use. Wherever pre-race Lasix is permitted, additional drugs are administered to most all of the diuretically-infused racing horses by their trainers and attending veterinarians. Lasix allows and encourages a lot of drug use. It legitimized the stage for the medication mentality that has haunted racing in recent years with all the notable breakdowns, sudden deaths and wrecks.”

“Lasix or Salix is furosemide, a potent diuretic that dilutes the urine and lowers the pulmonary blood pressure. The drug alters the electrolyte balance of racing horses and makes them vulnerable to heat stroke and metabolic dysfunction. As well, chronic diuretic use interferes with locomotory abilities required to run biomechanically sound by altering cardiac function, muscle function, nerve function, and most every other physiologic function.”

“Diuretics weaken horses. These days there is little doubt that pharmaceutically weakened horses are more vulnerable to breaking down. It is not surprising that Lasix jurisdictions have more breakdowns than drug-free jurisdictions. We should have known. Now we know.”

The above is not from some layperson bemoaning racing’s drug culture. Dr. Gustafson is a renowned expert in the field – practitioner, professor, regulatory vet, speaker, and writer – with over 30 years experience. It’s also worth noting that Gustafson is not against horseracing; in fact, he cherishes the “sport.” The facts reviewed: Raceday Lasix is given to virtually all American starters, and it’s bad for horses. Case closed (again).

In its Breeders’ Cup wrap-up (11/3/13), The New York Times used words like “awe-inspiring,” “breathtaking,” “beautiful,” and “thrilling” to describe the action. But, as indicated by the article’s title (“Moving Moments Send Shivers, Both Good and Bad”), there was a smattering of black (or red) in Santa Anita: Points Offthebench (dead), Centralinteligence (vanned off, had surgery), Secret Compass (dead).

The Times notes that Hall of Famer Bob Baffert, Secret Compass’ trainer, “was visibly shaken by the death.” But I wonder, was the $200 million lifetime earner similarly affected when he lost seven horses to “Sudden Death Syndrome” – defined by the Los Angeles Times as “when a healthy horse, training or racing, returns to the barn and dies, inexplicably, within an hour” – in a recent 16-month period (Nov 2011 – Mar 2013)? Maybe, maybe not. But with 2-year-old Secret Compass having just won a $250,000 Grade 1 at Santa Anita in September and seemingly well on her way to a lucrative career, the guess here is that this one stung just a bit more.

Baffert, of course, recovered in plenty of time to enjoy two wins totaling $3.5 million later in the Breeders’ Cup day. Funny how money and adulation so quickly heal the wounds.

The trainer, following his BC Sprint victory with Secret Circle, just four hours after losing his other “Secret” to a broken leg…

The following, unless otherwise noted, were “vanned off” American tracks this weekend.

In dismissing a lawsuit brought by the HSUS et al. on Friday, U.S. District Judge Christina Armijo opened the door for equine slaughterhouses to resume bloodletting in the U.S. (closed here since 2007). Plants in New Mexico and Missouri are at the ready. To many advocates, this is a crushing defeat. But as a practical matter, the court decision is neutral, neither good nor bad for horses.

A narrow focus on banning U.S. slaughter is misguided. It can’t even be argued that allowing it here will result in more deaths: In the last five years that American houses were operational, the average number of butchered American horses (both here and abroad) was 106,831/year. In the five years since (2008-2012), the average comes in at 132,593. Last year, 176,223 American horses were strung up and slashed on foreign (Canadian and Mexican, mostly) soil. Here or there, nothing changes unless both domestic slaughter and export-to-slaughter end. But what matters most – all that matters, really – is supply and demand.

On this site, we are mostly concerned with the racehorse part of the chain, which at roughly 19% (Thoroughbreds, that is) of the American slaughterbound is not insignificant. But equally in need of a voice are the tens of thousands of wild horses (who should be sterilized), spent beasts of burden (someone needs to tell the Amish that that era of equine servitude ended over a century ago), old trail horses, suddenly inconvenient backyard pets, and “retirees” from other “disciplines” who join racing’s refuse on the kill floor.

On demand, if people want something, business obliges. But if the supply is strained, the price will rise, perhaps discouraging at least some French and Japanese consumers. In the meantime, this is a reminder for horsemeat connoisseurs…

Slaughtering horses is neither necessary nor inevitable. From auction to dinner plate, it is simple commerce; it has nothing to do with humanely ending the lives of unwanted equines. The advocacy group Veterinarians for Equine Welfare says that slaughter is never an acceptable way to end the head-shy, flight-inclined horse’s life: “Rather than aiding horse welfare, as slaughter proponents contend, horse slaughter results in very tangible animal cruelty and suffering while engendering abuse and neglect.” USDA oversight (dubious as that is) or not, nothing can be done to sanitize slaughter. Nothing. 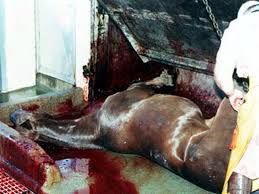