A ruling from Delaware (edited for clarity and brevity; all emphases mine):

“Alison Escobar appeared before the Board of Stewards at Delaware Park in the matter of his horse Ashiham. The Stewards were concerned for the health and welfare of Ashiham. Stewards considered all evidence and testimony in this matter as follows:

“1. Ashiham, trained by Escobar, was a vet scratch during prerace exam at Tampa Bay Downs on Apr 21, 2022, for lameness and heat in the LF flexor tendon, and was placed on the TB Vet’s List. In testimony, Escobar stated Ashiham was sore but did not want the horse scratched because he was the morning line favorite.

“2. Ashiham worked on Jun 9 at Palm Meadows. Florida Regulatory Vet Dr. Jane Teichner observed the horse lame on his LF while on the track after the work.

“4. Dr. Aponte placed Ashiham on the Gulfstream Vet’s List and required an ultrasound before any workout was scheduled. No ultrasound was ever taken.

“5. On Jul 12, Ashiham arrived by van from Palm Meadows to Delaware Park. No foal papers were ever turned in to the Racing Office as required by the Commission.

“6. On Aug 3, Safety Steward Eric Coatrieux requested that Commission Vet Annie Renzetti inspect Ashiham after he observed him lame on the track with a significant bowed left tendon.

“7. On Aug 3, Dr. Renzetti observed Ashiham significantly lame – 4/5 – and a bow on the LF flexor tendon that was warm to the touch and sore on palpitation. Dr. Renzetti placed Ashiham on the Vet’s List requiring an immediate diagnostic testing including ultrasound and stall rest until reevaluated by Commission Vets.

“8. Trainer Escobar stated in testimony that Ashiham was not under the care of a practicing vet and had not been observed at Delaware Park by a vet prior to the Stewards hearing.”

Verdict: “Cruelty to a horse or neglect of a horse entrusted to a permittee’s care: Trainer Escobar failed to follow medical recommendations after being placed on two separate Vet’s Lists. Alison Escobar is suspended for a term of 60 days to start on Aug 19, 2022, to and through Oct 17, 2022, and fined $2,500.”

So, it bears repeating: State animal-cruelty statutes, woefully inadequate as most are, do not apply to horseracing. Rules, enforcement, prosecution, sentencing, etc. are within the province of racing commissions, which, though they would never admit, are hopelessly compromised. This is why this human excrement will be right back at it again in 60 days.

As a point of reference, here is the Delaware cruelty statute, which would have at least subjected Escobar to one year in jail and also prohibited him from keeping animals for five years: “A person is guilty of cruelty to animals when the person intentionally or recklessly: (1) subjects any animal to cruel mistreatment; or (2) subjects any animal in the person’s custody to cruel neglect. Cruelty to animals is a class A misdemeanor; any person convicted of a violation of this section shall be prohibited from owning or possessing any animal for five years after said conviction.”

The following video shows three horses going down at three tracks yesterday: Romped at Belterra (another horse, Majestic Valley, collided with Romped and lost the jockey); Above the Line at Penn; Gattosing at Charles Town. All three were “vanned off.” I will of course follow up with the relevant racing commissions.

The unconscionable abuse continues for a pair of long-suffering horses. In the same race Wednesday at Presque Isle, Samurai Zip, 12, went under the whip for the 77th time, and Fox Rox, 11, went under for the 120th time. 120. PA’s “Equine Safety and Welfare Action Plan” exposed as the obscenity that it is, again.

The repugnant Keri Brion – here, here – tweeted this video of one of her trainees, 6-year-old The Mean Queen. While compassionate people see animal abuse – an intelligent, social being locked alone in a concrete cell, and, by the way, exhibiting a stereotypy – Brion (et al.) thinks it’s funny. Notice also that this was retweeted by the equally repugnant Dr. Kathryn Papp (see comments section). 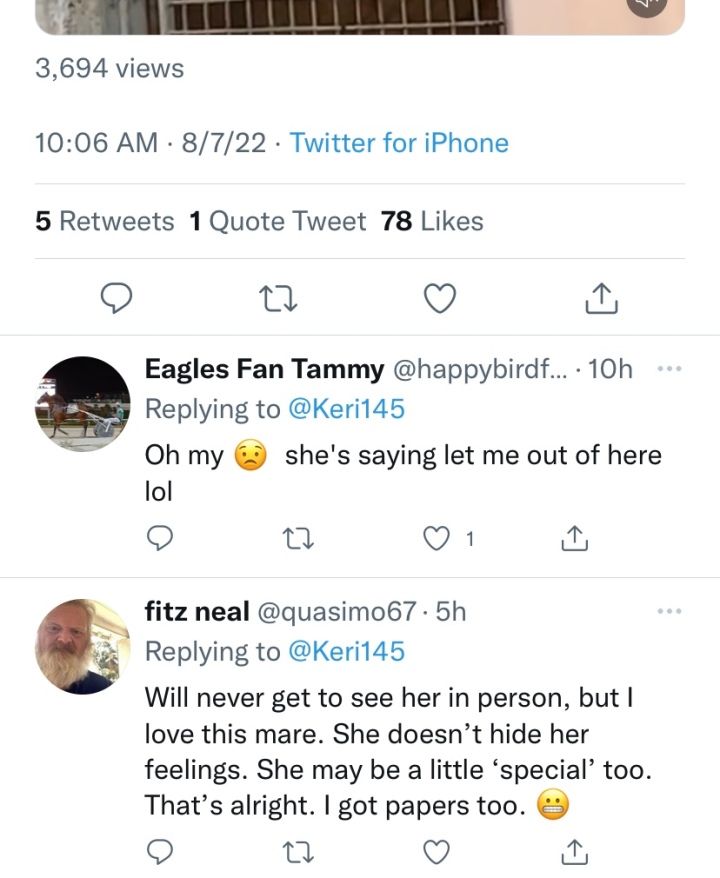 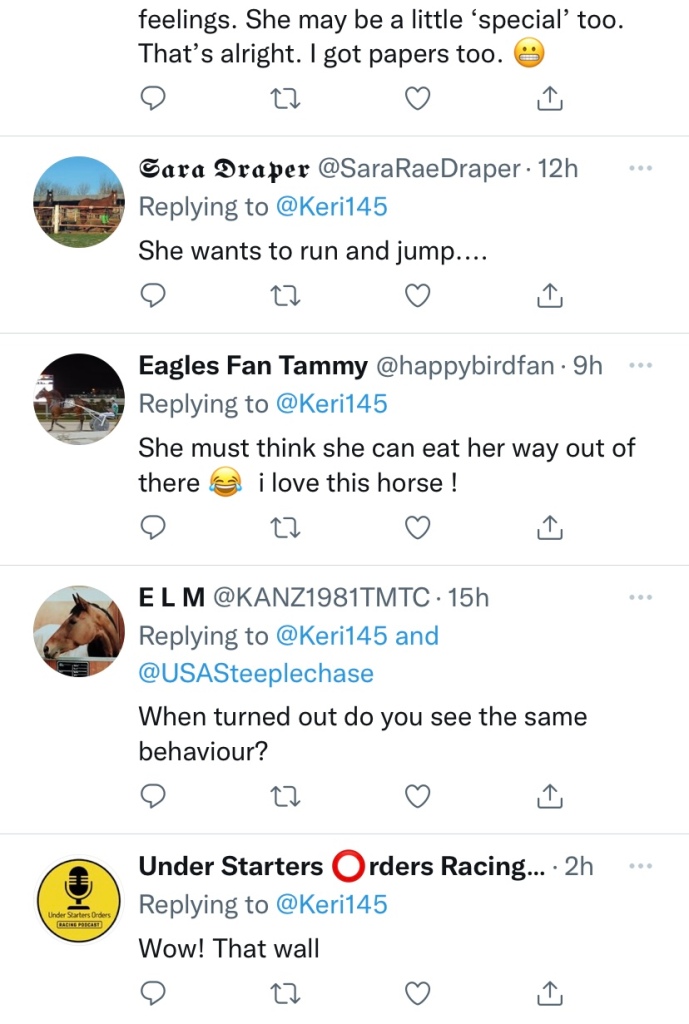