Willow, a recently-raced mare when found starving in October of last year, was humanely euthanized on June 24 with Laura, her rescuer and forever home, at her side. Willow’s severely damaged ankle could no longer support her, nor would it respond to pain management. Although Laura knew Willow’s life would be cut short because of what racing did to her, she had longed for more time with this sweet mare who had learned to trust, and been so easy to love.

Laura’s goodbye: “It was the hardest, yet at the same time the kindest, thing I had to do for Willow. She went to sleep peacefully. Duke and Bart [Willow’s herd mates] came to say goodbye to her, so they knew what happened to their beloved Willow.”

Willow was eight years old; her “forever” with Laura was 230 days. 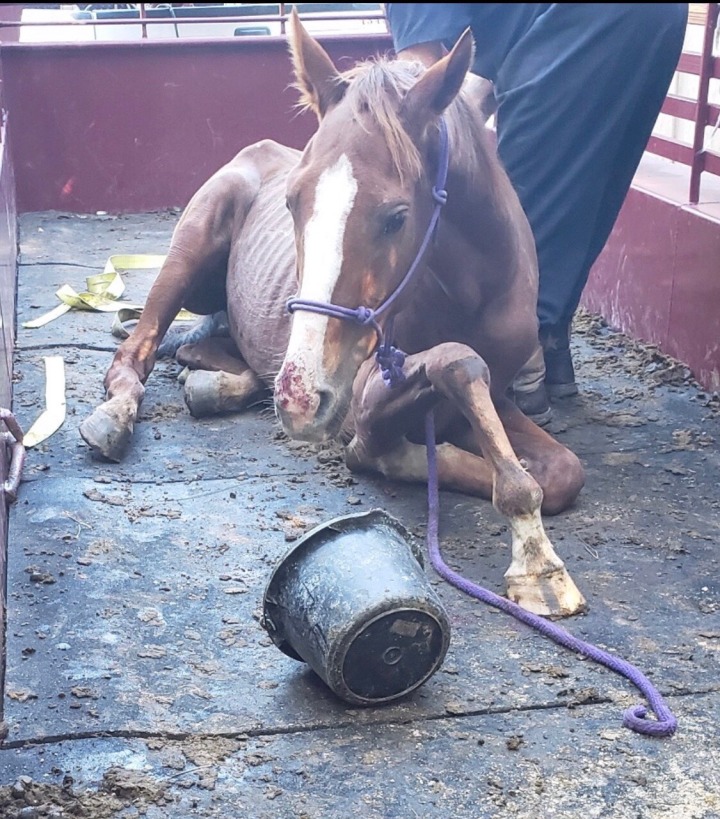 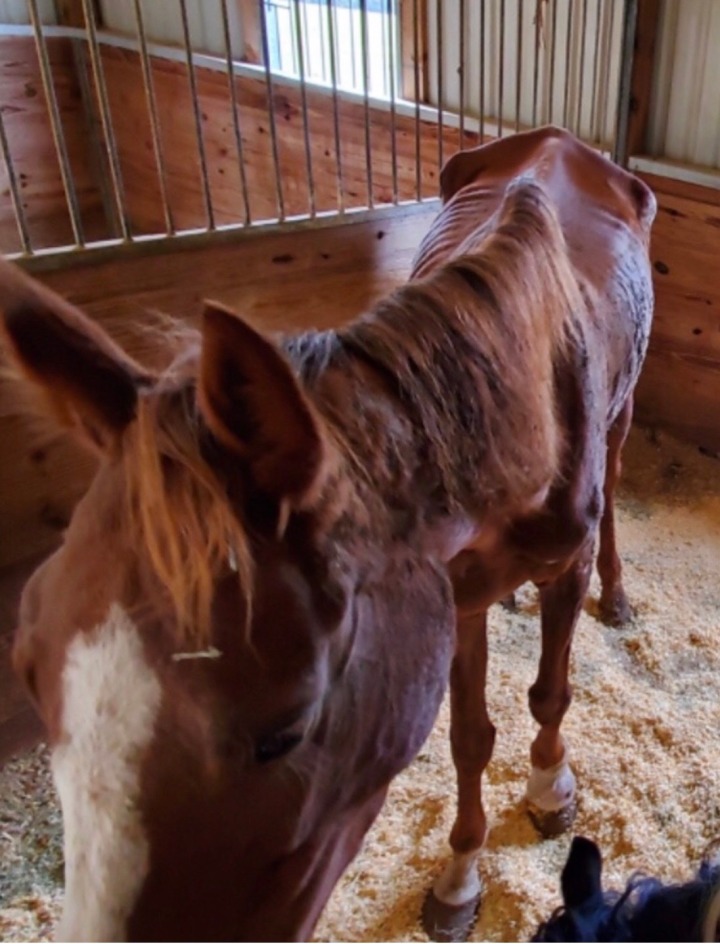 Willow enjoying her limited time with one of her mates, Duke. Although Laura was able to bring the starved mare back to a healthy weight, her damaged ankle continued to deteriorate: 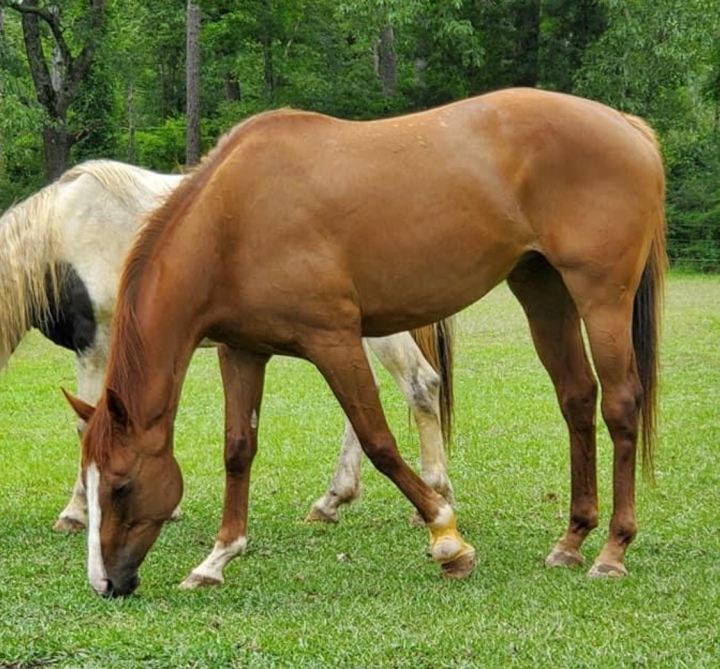 Promising Willow she will always be loved: 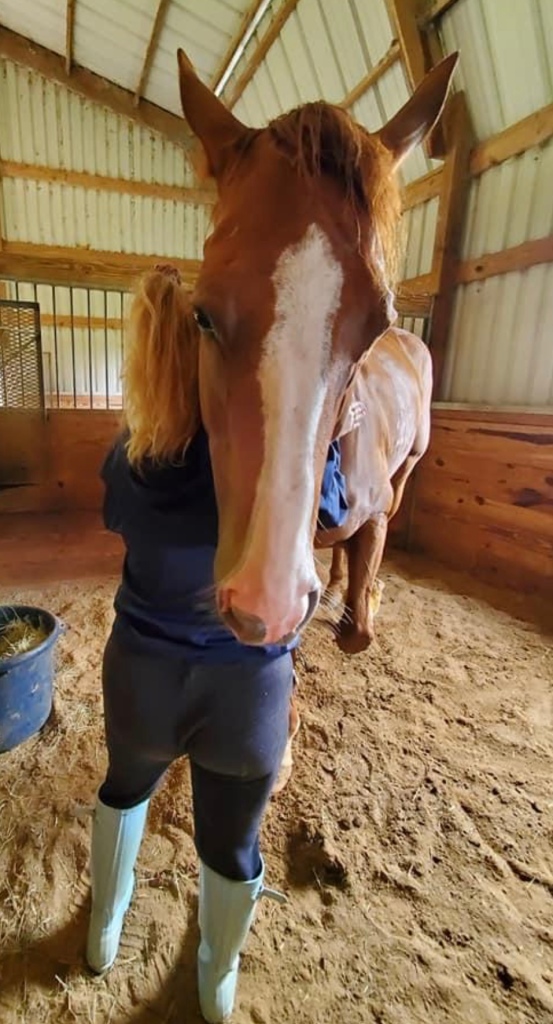 Willow, a casualty that this vile industry will neither acknowledge nor record. But we will here. Goodbye gentle soul… 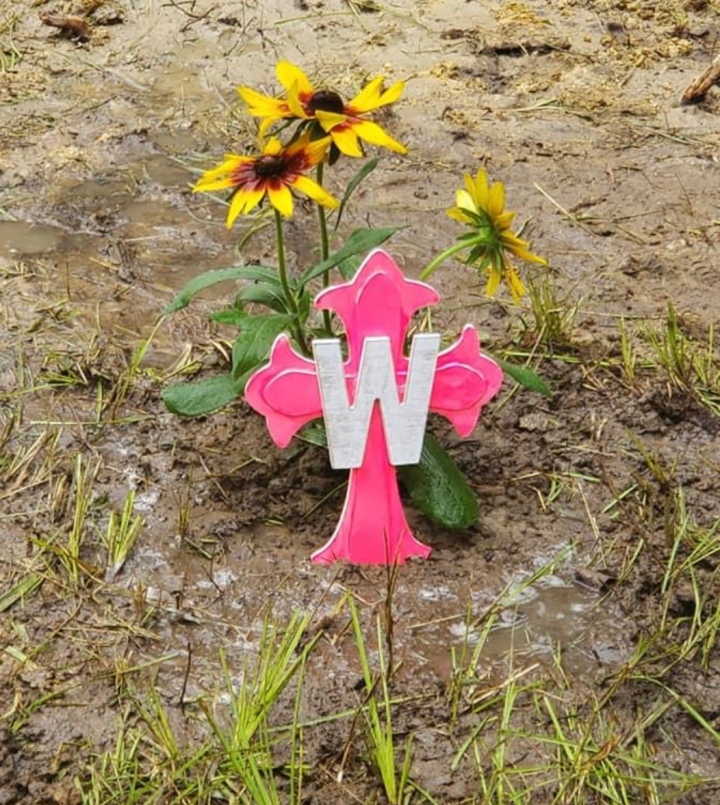 On July 30, 2019, Rose’s Asset was raced in a 5K claimer at Thistledown for owner W.A.R. Racing and trainer Jeffrey Radosevich. The 6-year-old gray mare finished last of 7, 16 lengths back; Equibase said she “hopped at the start…then stopped.”

A few weeks later, Rose’s Asset was one of a “couple mares available, possible broodmare prospects, $750.” Her ad, exactly as it appeared: 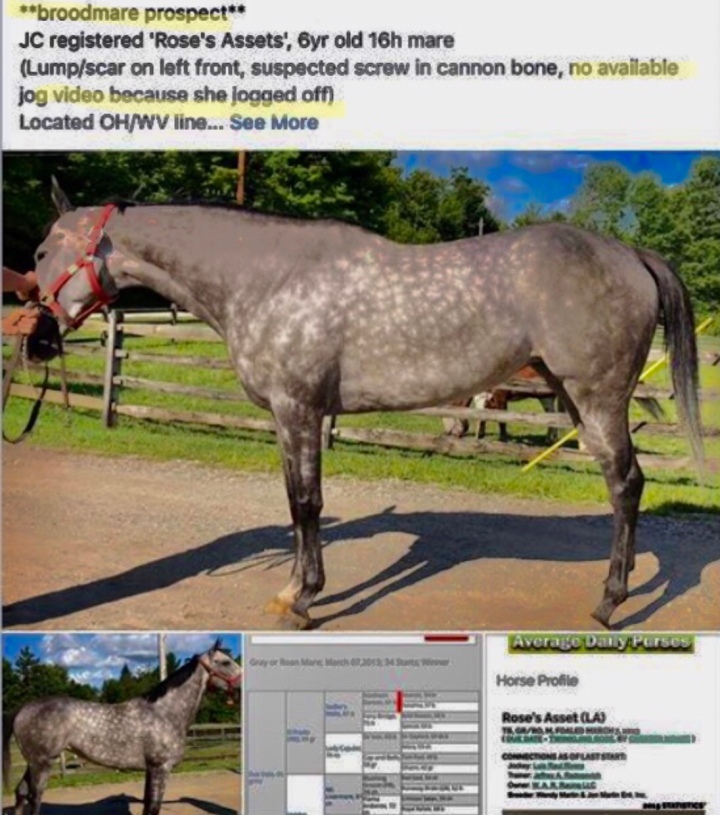 One week later, owner/trainer Gerald Erfle ran Rose’s Asset at Mountaineer: “took a bad step, [fell], vanned off.” According to a fan, “She went down – couldn’t get up.” And according to the West Virginia Racing Commission (through Patrick’s FOIA request), Rose’s Asset suffered a “compound, comminuted MCIII fracture” – the cannon bone of one of her front limbs splintered into pieces, with fragments piercing her skin.

A lame “broodmare prospect” on August 18 – then raced to her death just one week later. Of course, Erfle has blood on his hands, but how about W.A.R. Racing and Radosevich (for selling – dumping – rather than retiring her), the stewards, track officials, and (perhaps worst of all) the vets? Vile, to the core.

For those of us who follow Horseracing Wrongs, the descriptions of dead horses are all too familiar:

All of these horrific descriptions come from the racing industry itself through FOIA requests. They aren’t propaganda or fake news, as the racing supporters would have you believe, but are factual accounts of horses dying for gambling entertainment. However, there are horses who do make it out alive but are so badly damaged that euthanasia is the only humane option. Every single one of these horses deserves to be recognized and have their story told. This is Fast Karma’s.

It was late November, 2018…a chilly, gray day…a prelude to the winter right around the corner. I was on my way to do a sanctuary site-check for a calf I had recently purchased from a farmer to prevent her from eventually ending up on someone’s dinner plate. I was focused on the unfamiliar country road when I got a call from Sharman Privett, an equine advocate and a friend. Sharman has a big heart and always tries her best to network for those many horses who have no other options.

Sharman asked if I knew of anyone who might be interested in a sweet, five-year-old Thoroughbred who could possibly be a low-level pleasure horse or, at worst, a pasture companion. Sharman is on the board of a TAA-accredited facility located in Michigan, so I immediately asked her if that rescue could take him; she said no, they were full. Of course, I didn’t know of anyone looking for a horse who, most likely, would be limited, but I was determined to help in any way that I could even if it meant euthanasia down the road. Having been in the rescue world for many years, I believe that a horse waiting to be slaughtered would gladly change places with a horse waiting to be euthanized, and I have made it my personal mission to never allow a horse with whom I’ve become involved to get on THAT truck.

Sharman agreed to take Karma temporarily while we looked for a new home. She immediately had x-rays done by her local vet. He told her that Karma’s knees were a “hot mess of chips [fractures].” Heartbreaking. Karma was ONLY five years old…still a baby…and should have had a promising future, but like so many others, racing had taken a horrific toll and sealed his fate. Still, we soldiered on, hoping against hope.

I shared Karma’s story with Rose Smith, a regular on this site, and after several discussions we agreed to give Karma a fighting chance. We decided to split the cost of knee surgery at Equine Specialty Hospital if, of course, the surgeon felt his long-term prognosis would be favorable. But first we needed to find him a safe place since Sharman couldn’t keep him. We eventually found a rescue that would accept him.

Karma’s initial x-rays were forwarded to Equine Specialty and I spoke to Dr. Nate McClellan about Karma’s prognosis. Although Dr. McClellan never physically examined Karma, his analysis of the x-rays was sobering: severe damage in the upper joints of both knees, the right being the worst, as well as fragmentation in the back joints. He described the joints as “end stage” and the chips as “big fragments” – a couple centimeters in length. Karma was suffering from end-stage arthritis. Based on the x-rays, Dr. McClellan felt that Karma had a “fairly poor surgical prognosis.” I was obviously upset, but I gathered my thoughts and asked the question I have asked so many times before: How could Karma have raced on those knees? It was Dr. McClellan’s opinion that Karma had been injected to keep him on the track.

After my conversation with Dr. McClellan, Rose and I decided that Karma should be euthanized, but we wanted to give him a few good months – to give him a life, brief though it would be, where nothing was expected, where he could just “be a horse.” I was notified in July that the rescue that had agreed to take Karma was closing, and I decided to adopt him, along with two others. Karma was not in great condition, having lost considerable weight. On Friday July 26th, the three horses were delivered to a barn where Rose and I have previously boarded. The owner loved Karma and treated him wonderfully while managing his pain with meds. She described him as a sweet “in your pocket” horse. I visited him regularly and grew to love him dearly.

Karma, in August, right after I acquired him… 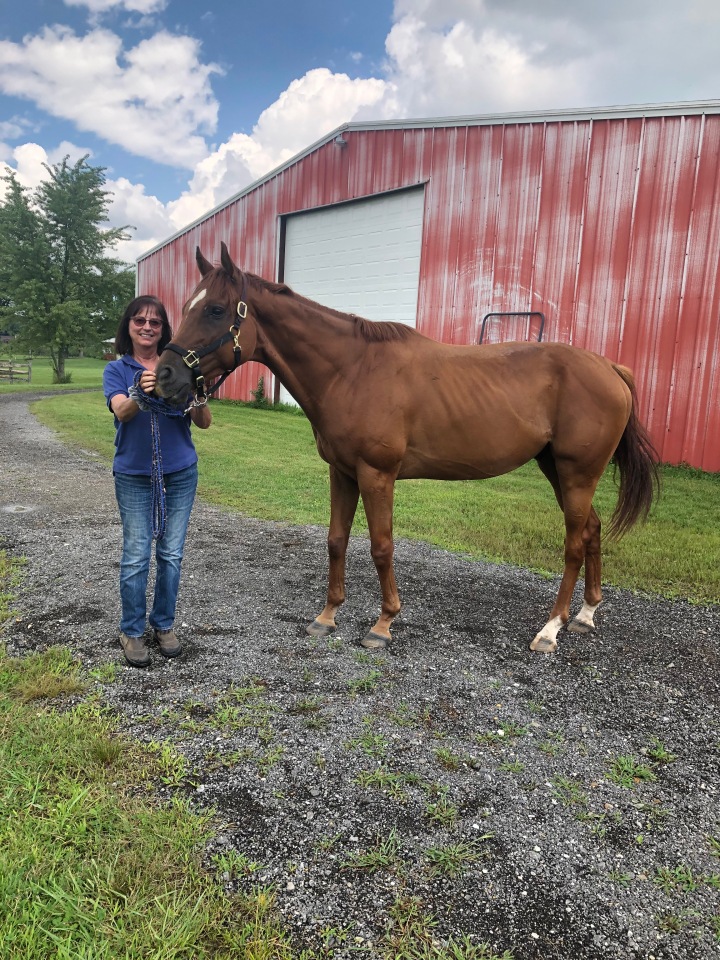 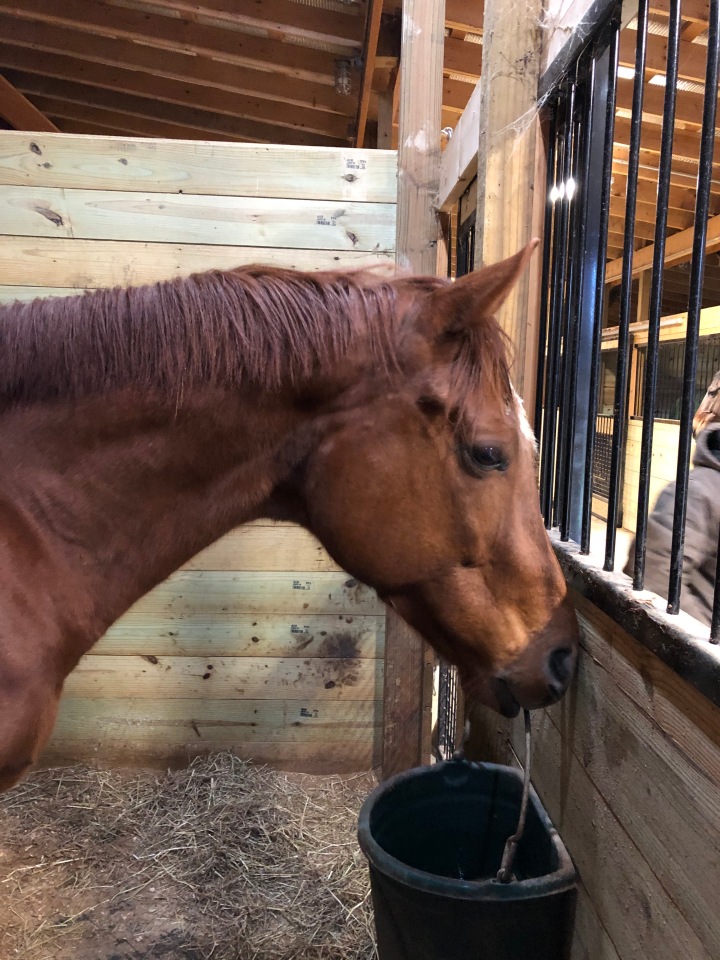 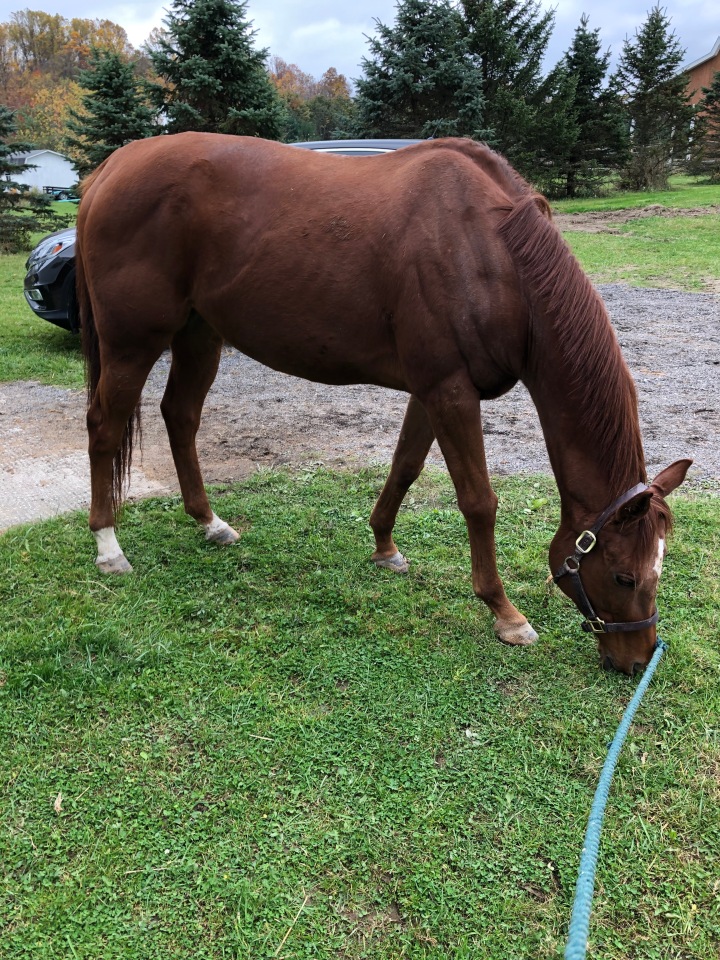 On December 16th, Karma was euthanized. I was there wishing him a safe trip across the Bridge, reassuring him that his friends would be waiting to greet him. The ending was peaceful but filled with bitter sadness. Here was yet another loving, trusting horse destroyed by an industry that obscenely claims that their “athletes” are “loved like family.” I simply call it the BIG LIE.

Fast Karma earned $73,000 for his racing “connections” during his brief “career.” First thrust onto the track at two, he was put to the whip 19 times in all. In 2018, he was raced just once, at Belterra in May, finishing 6th of 8. However, five months later, he had a “timed workout”: 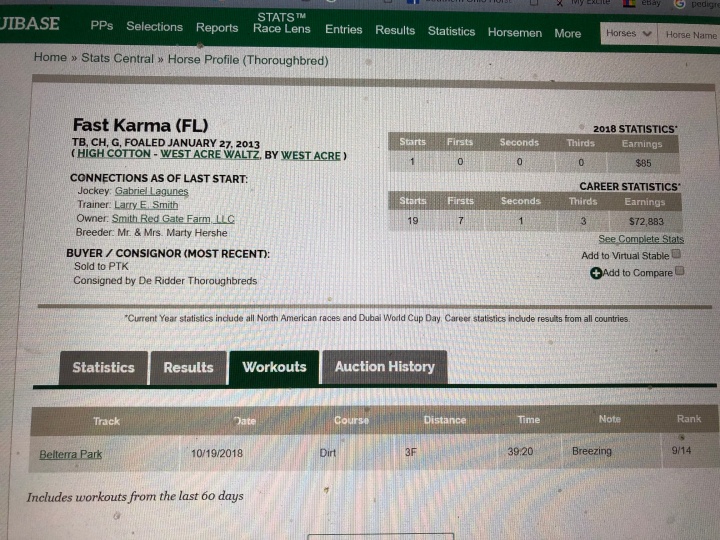 Yes, a workout – with an eye toward racing him again – on two knees with END-STAGE ARTHRITIS. Anger doesn’t begin to describe how I feel. Truth is, that damage started way before then. In the end, it was up to those of us who have never made a dime in this sinister industry to step up for poor Karma. Those who exploited, abused, and eventually trashed him have already moved on to the next asset. But we who got to know and love him will NEVER forget. RIP, Karma.

Karma, the day he was euthanized… 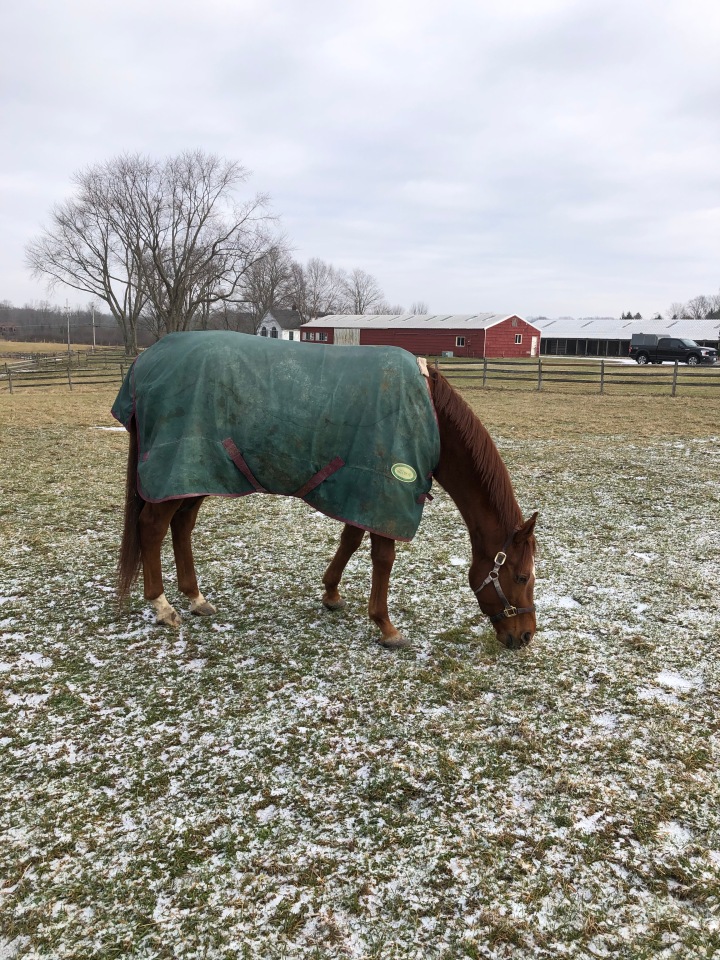 Horseracing Wrongs recently reported on the death of Tigers Rule in the 9th at Churchill Downs November 24. Tigers died from multiple fractures and a torn artery. But…the necropsy also showed “ulceration of the stomach.” Ulcers don’t get much attention when a horse dies in the dirt or succumbs to colic locked away in his stall. The focus, understandably so, is on the broken necks, severed spines, and fractured legs, but make no mistake, ulcers are killers…silent killers…and are prevalent in the vast majority of horses in the racing industry. This story is about one such horse, a 7-year-old mare who was fortunate enough to survive a death sentence because of one woman’s determination to get her the help she so desperately needed. (Because I need to keep my sources confidential, I will call this horse “Lady.”)

In mid-October, a racing insider reached out to let me know that a horse was colicking at a low-level track. Unfortunately, this person didn’t have the financial resources to treat Lady. Rose Smith, a regular on this site, generously offered to foot the bill if Lady was seen by the track vet. She was, but for the next five days the vet vacillated on the diagnosis. Initially, Lady would be okay and colic concerns were dismissed. But then she was diagnosed with (gas) colic and eventually a blockage in the cecum. Of course, without an ultrasound definitiveness on something like this is almost impossible. It had become a guessing game. By Sunday, five days after I was contacted, there was no improvement, and we were all resigned to the possibility that Lady (below) would need to be euthanized. 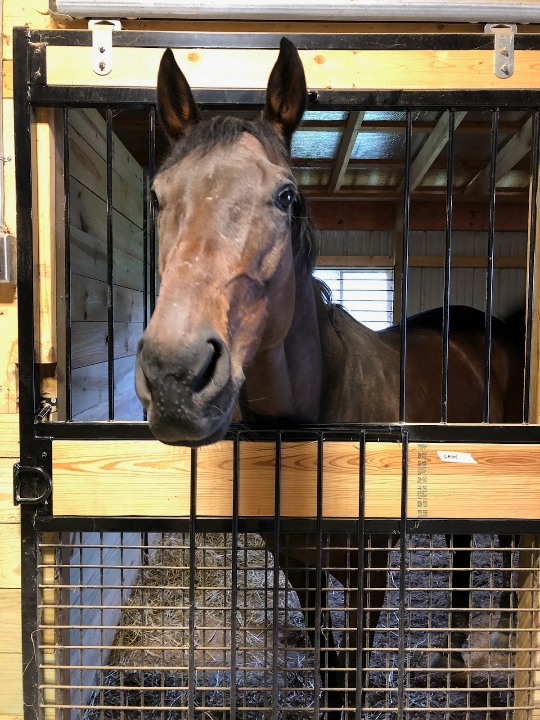 In spite of the fact that Lady was suffering and in awful pain, she showed a will to live and exhibited a fighting spirit. She simply wasn’t giving up. Rose and I were both concerned that the vet had provided woefully inadequate treatment for Lady, and she (the vet) was now suggesting euthanasia. Again Rose stepped up, offering to cover the cost of Lady going to a specialty hospital in northeast Ohio.

Lady arrived at Equine Specialty Hospital on a Sunday and remained there for four days. The surgeon scoped her and it was determined that she had Grade 4 Bleeding Ulcers. (Ulcers are graded 1-4, with 4 being the most serious, possibly fatal.) Simply put, Lady was at high risk of bleeding to death. The blockage was in the colon, not the cecum as diagnosed by the track vet. Lady was aggressively treated, rehabbed, and is doing remarkably well. Even though she has recovered, she suffered, unconscionably, in silence on the backside of that track. What’s worse, there are countless more suffering – all alone in a tiny stall – in exactly the same way.

Risk factors for ulcers include:

Hmm. To what kind of horses do all these factors apply? In fact, research has shown that over 90% of Thoroughbred racehorses develop ulcers.

Imagine any horse being forced to run with ulcers, especially a Grade 4 Bleeding Ulcer, yet the apologists babble incessantly that they love their horses like members of their families. Nothing, of course, could be further from the truth. All the peppermints, jolly balls, and kisses on the nose can’t change the cruel, unnatural life of a racehorse. Lady’s story illustrates this perfectly. Without the intervention of someone outside of racing, Lady would be dead, not from a a broken neck, severed spine or fractured limb, but dead just the same. 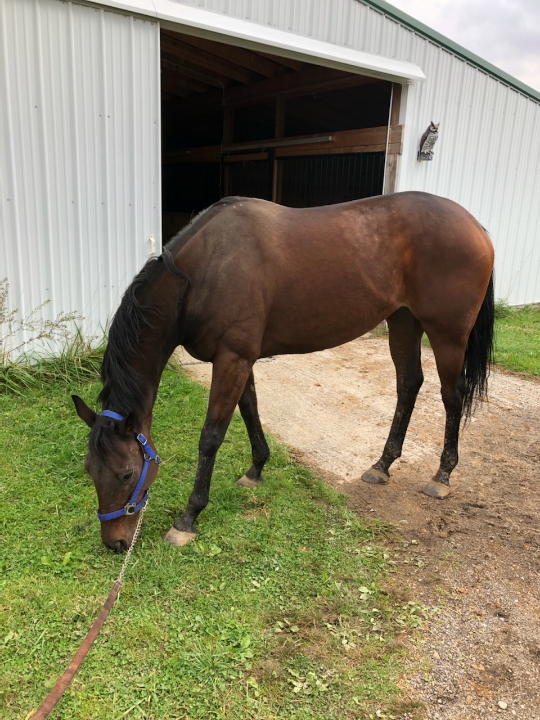