Killer Diller is a 6-year-old career claimer currently doing time at Finger Lakes. According to the website “Finger Lakes Finest Thoroughbreds” (“helping former racehorses gallop into your heart”), the bay gelding (below) is “for sale” – and has been since September:

“This solid bay AP Indy grandson has decided he just doesn’t want to race anymore. His trainer says he is a real personality but is very quiet to handle and ride. He was super quiet for his pictures. Trainer says sound with no vices [vices?]. Young, athletic, handsome — you can go in a lot of directions with this horse!” Contact: Deb Breed 585-289-3467, Asking: $1,000 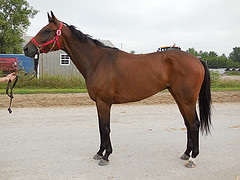 After owner/trainer Deb Breed concluded that Killer Diller “just doesn’t want to race anymore,” she has whip-run him 10 times – 7 in the last 10 weeks:

Abuse in racing comes in various forms, not the least of which is running a horse into the ground. Consider a gelding named Coaltown Legend, nine years old and 63 races into a career that began before Barack Obama was elected president – the first time. In his last three starts – all claiming, all at Penn National, and all for the same connections – Coaltown Legend finished last of 7, 27 1/4 lengths back on May 28th; last of 7, 13 3/4 lengths back on June 6th; and last of 7, 13 1/2 lengths back this past Wednesday. To recap, that’s three dead lasts for a 9-year-old racehorse in the past four weeks.

To horseracing the industry, the horses are but expendable assets – movable, replaceable cogs in a gambling machine. Simple chattel. As such, if Coaltown Legend’s current masters – trainer Bryan George and owner Marcus Rodriguez – choose to run him till he breaks, they can. And there is nothing to be done about it.

Back in the spring of 2012, Governor Cuomo’s office ordered the New York Racing Association (NYRA) to investigate a spate of racing fatalities (30, in all) at Aqueduct’s 2012 winter meet. Ultimately, the Racing and Wagering Board (RWB) appointed a 4-member “Task Force On Racehorse Health and Safety.” Summarizing the findings, Howard Glaser, Cuomo’s director of state operations, said (The New York Times, 9/28/12), “At the New York Racing Association, concern for the health of the horses finished a distant second to economics.” Here are the highlights:

Lack of Transparency and Disclosure: None of the fatally injured horses had complete necropsies. In addition, there were no urine samples collected and only limited blood testing, leaving open the question of illegal administrations. Although rules exist for when and how much drugging is allowed, trainers failed to report (and the RWB failed to monitor) injections. Furthermore, racing’s ubiquitous corticosteroids often mask breakdown-causing injuries or preexisting conditions like this one, making the track vet’s job all the more difficult. And lastly, there were discrepancies between the trainers’ description of veterinary care and the practicing vets’ actual records, which, by the way, are not required to disclose dose information.

Conflict of Interests: All regulatory vet responsibilities are performed by NYRA vets who answer directly to NYRA racing officials; these officials, not the stewards, execute scratches, and racing officials do not like scratches. In addition, “written protocols containing standards and practices were not provided to the NYRA veterinarians,” leading to inconsistent pre-race procedures and scratch criteria. Worse, the dollar-driven, mind-your-own-business culture discourages whistleblowing: Generally, trainers don’t tattle on other trainers, and jockeys, with ever an eye on future mounts, are disinclined to voice soundness concerns.

Disproportionate Purses in Claiming Races: The Resorts World Racino, which opened in the fall of 2011, resulted in artificially inflated purses in the claiming races that predominate at Aqueduct. The extraordinarily high purse-to-claim ratios “incentivized poor decision-making by a range of stakeholders that increased the risk for mismanagement and subsequent injury.” In short, racing cheap, broken horses for jacked up purses is great for people, bad for animals.

Let’s see if I have this straight: The owners, buying and selling at a frenzied and historic rate, are chasing racino cash with second-rate (at-risk), expendable assets. The trainers, operating in a highly competitive environment, either skirt or outright flout existing drug rules, often with a wink and a nod from private veterinarians who disdain answering to bureaucrats. The track vets, briefed on the primacy of field size, are compromising their professional integrity. And the jockeys are risking their teammates’ lives to preserve paydays.

Whether some or even all of the promised reforms have taken hold is quite beside the point, for as recently as last year, the preceding was standard operating procedure at the New York Racing Association. Says all we need to know.

The following is a sequence of jump-racing pictures from Ireland. Although the Daily Mail reports both jockey and horse as doing fine, I can think of no more damning visual of the steeplechase than this…

Melodeeman was a seasoned veteran who had amassed over $250,000 in earnings when he entered the gate at frigid Penn National on January 21, 2010. Running for $18,000 (thanks to racino money) in a $4,000 claiming race, the Thoroughbred, who was, according to an exercise rider, “clearly lame” prior to the race (NY Times, 4/30/12), broke his cannon bone on the homestretch. He was euthanized at the track. The necropsy revealed what his owner (his sixth) and trainer probably already knew: This horse was damaged goods. In addition to degenerative joint disease in both front legs, there was this (graphic). Oh, and he also had the banned sedative fluphenazine in his system. Now we know why.

On a cold winter night in Central Pennsylvania, with only hardcore gamblers there to watch, Melodeeman, almost ten full years into his servitude, died. This is horseracing. (For further reading on the racino effect, see this NY Times article.)