The NFL’s Week 15 schedule was played from Saturday to Monday. Not a single player, of course, lost his life. Here is a partial list of the “equine athletes” who were killed during that same three-day stretch:

4-year-old Redneck Lazy in the 4th Saturday at Mahoning (my confirmation).

2-year-old Getting Acquainted in the 1st Saturday at Los Alamitos (Daily Racing Form). (Equibase said she “broke down of her own accord.” Imagine that.)

4-year-old Dreaming of Andy A in the 3rd Sunday at Tampa Bay (Equibase).

3-year-old Lake Ouachita in the 3rd Monday at Parx (Equibase).

Sport? Only to the ignorant or delusional. 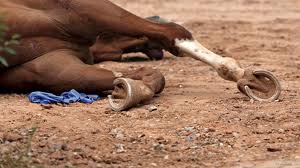