Sunday’s Akron Beacon Journal tells an all-too-familiar tale (New York, West Virginia, Indiana, etc.) of a “drying up” racing industry being propped by the corporate welfare that is euphemistically referred to as a “state-business partnership.” It goes something like this: Horseracing, especially harness and claiming, is finding it increasingly hard to compete with full-service casinos and state lotteries. But instead of quietly fading away like so many other industries that time passed by, racing demands, arrogantly, to be saved.

In 2011, Ohio racing found itself on the brink. Enter Video Lottery Terminals, and the birth of Ohio “racinos.” From the article: “Thanks to big dollars being pumped into the sport by slots-like video lottery terminals (VLTs) at the state’s horse tracks, the Ohio horse racing industry is rebounding after at least a decade on the wane.” The “big dollars,” a 9%-11% cut of VLT operations, are funneled directly to race purses. So purses that were once $2,000-$5,000 are now $5,000-$25,000. People come to play slots and – unwittingly, for the most part – line horsemen’s pockets. Nice deal if you can get it. 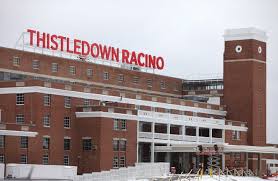 Of course, anytime subsidies are questioned, racing indignantly reminds that the industry is more than breeders, owners, and trainers. Kill the subsidies, so their argument goes, kill a host of workingman jobs – farriers, groomers, walkers, farmers, tack dealers, etc. Even the white-collars would suffer. One veterinarian from the article, Dr. Michael Latessa, happily reports that the new economic model is a boon to his profession: “As far as our business, we’ll be busier as vets obviously because there will be more horses coming in.” More racing: more prescriptions, more injections, more injured bodies, more euthanasias. Hard to imagine anyone going to vet school for that.

Yes, jobs are at stake, but let’s not pretend that the horsemen care about anyone’s economic future but their own. The larger point, however, is that industries come and go; if your product is no longer viable, find a new product, a new line of work. It’s not within government’s charter to revive the obsolete. In fact, it’s patently unfair. Grant the casino licenses, but without the mandated percentages to those who have done nothing to earn them. This would leave more for education, the intended beneficiary of state-sanctioned gambling. Let racing, like the vast majority of American businesses, fend for itself.